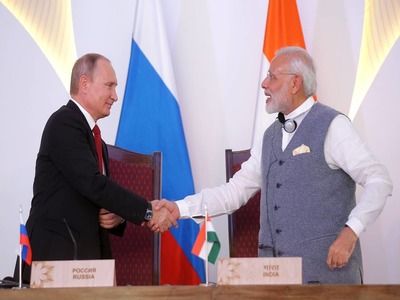 Fuel and energyCoalMinistries and departmentsInternational activities
OREANDA-NEWS. Relations between Russia and India in the field of energy will be re-developed at the upcoming Eastern Economic Forum. This was announced by the Indian Minister of Oil, Natural Gas and Steel Industry, Dharmendra Pradhan, in an interview published on Monday with the Indian Business Newspaper.

"A joint statement on comprehensive energy cooperation will be prepared. A detailed five-year roadmap will be signed. Several more issues will be discussed, discussion of these issues is at the final stage. A new dimension is coking coal. This is at the government level", the newspaper quotes the words Pradhana.

“Agreements will also be signed at the company level. We are preparing for this”, he added. "Energy is one of the main factors in the growth of bilateral trade", the minister said, adding that on the sidelines of the forum, it is expected that in the presence of Indian Prime Minister Narendra Modi and Russian President Vladimir Putin several preliminary agreements will be signed, including regarding cooperation on oil, gas and coal.

"The partnership between the two countries in the energy sector is long-standing and strong. The Russian side has invested about $ 13 billion in India. The Indian side has generally invested about $ 7-8 billion in Russia", said the Indian minister. "We are going to export crude oil to India from Russia. We are also talking about further investments in the Russian mineral exploration sector. India sees a great prospect in Russia satisfying India's needs for coking coal. The Russian East is their coal belt", Pradhan added.

The Minister noted that large Indian companies such as Tata Power, SAIL, NMDC, Jindal are already starting to invest in projects in the Far East or are considering the opportunity to do so. Russia also offers the Indian side to take part in large-scale projects, including in the Arctic region. "The commercial aspects of this proposal are being discussed", he said.