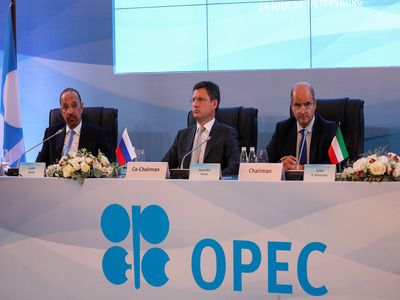 Fuel and energyOilInternational activitiesEvents
OREANDA-NEWS. Nigeria will reduce production under the OPEC+ agreement by 0.4 million bpd from the level of October 2018 to 1.412 million bpd from May to June, the country’s Ministry of Oil said in a statement.

Production will also decline accordingly by the end of April 2022 in accordance with the quotas prescribed in the agreement, the report said. "We expect that the historic deal will restore the price of oil by at least $ 15 per barrel in the near future. Additional budget revenues will increase by $ 2.8 billion", it says. Rising prices will make it possible to compensate for the decline in production and realize the planned investments, according to Nigeria.

On Thursday, OPEC+ countries during a video conference discussed the market situation and reduced oil production. As follows from the draft OPEC+ agreement, which was reviewed by the Russian media, in aggregate, the OPEC+ countries will limit production by 10 million bps from 43.8 million to 33.8 million bpd.

The previous OPEC + agreement ended at the end of March. It wasn't possible to extend it due to disagreements between Russia and Saudi Arabia, which could not agree on the conditions for continued cooperation.