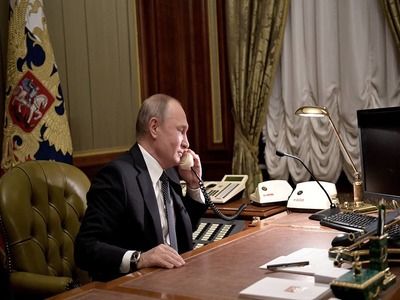 Fuel and energyInternational activitiesIncidentsOil
OREANDA-NEWS. Russian President Vladimir Putin held a telephone conversation with the Crown of Saudi side with the Crown Prince, Minister of Defense of Saudi Arabia, Mohammed bin Salman Al Saud. “The situation on the global hydrocarbon market was examined, including the implementation of the agreements in the OPEC plus format”, the Kremlin’s press service said. “Mutual mood was expressed to continue close coordination in order to stabilize world oil prices”.

In addition, Putin expressed concern over attacks on oil refineries in Saudi Arabia and called for an investigation into the incident. "The situation in connection with the attack on oil refineries in Saudi Arabia was discussed. Vladimir Putin expressed concern in this regard and spoke out for a thorough and objective investigation of what happened", the Russian leader’s press service said in a statement. Also, "they touched on the preparations for the planned visit of the head of the Russian state to Saudi Arabia".

Recall that last weekend and Monday were eventful. First, on Saturday, September 14, two companies of the Saudi Arabian national oil company, Saudi Aramco, were attacked by drones. And on Monday, September 16, the global market caught up with the reaction of investors to what happened.

When the attack occurred, trading on the exchange was already completed, and they resumed on Monday night. First of all, market participants naturally panicked - Brent went up by 13.8% - to $ 68.41 per barrel against $ 60.15 at the close of trading on Friday. However, experts say that on this day, peak values in the first minutes of trading reached $ 71.95. The media noted that this is the largest intraday jump in prices over the past 30 years.