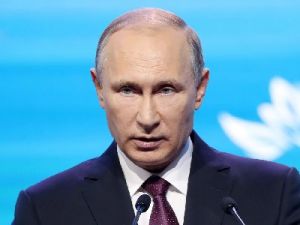 OREANDA-NEWS Russian President Vladimir Putin arrived in Crimea on March 18 and launched the Tauride and Balaklava power plants in Crimea and Sevastopol.

When you start new units, together with the President was also attended by Deputy Prime Minister Dmitry Kozak, Minister of energy Alexander Novak, the head of the Crimea Sergey Aksenov and General Director of Rostec Sergey Chemezov.

"The event can be called historical-energy facilities of this level in the Crimea has never been. The power plants put into operation in Sevastopol and Simferopol are of key importance for ensuring the energy independence of the Peninsula," said Sergey Chemezov.

He also recalled that the first power units of both thermal power plants were launched on October 1 last year. After entering the second stage, the total capacity of the two stations is 940 MW, which is almost 90% of the electricity needed in Crimea. After the introduction of the TPP at full capacity, Crimea began to produce 2,070 MW, excluding non-permanent wind and solar generation, as well as mobile stations.

Thermal power plants running on natural gas, the backup fuel. In addition, the equipment of power plants is earthquake-resistant, withstands earthquakes with an amplitude of 9 points.

In addition to power plants, power lines and 347 kilometers of high-pressure gas pipeline from the Krasnodar region were built.

- New energy facilities create conditions for sustainable energy supply to industrial, social facilities and the population of the Crimea, as well as form a reserve of capacity necessary for the implementation of the industrial and tourist potential of the Peninsula, - added in Rostec.

Recall that in 2014, electricity to the Crimea was almost completely supplied from Ukraine – it is about 900-950 MW. The Peninsula at that time produced only 162 MW, power plants were in poor condition.

Vladimir Putin during a visit to the Crimea visited the memorial complex of the monuments of the defense of Sevastopol in 1854-1855 and 1941-1944 "Malakhov Kurgan". Then the President went to Simferopol and will take part in the celebration of the fifth anniversary of the Crimean spring.