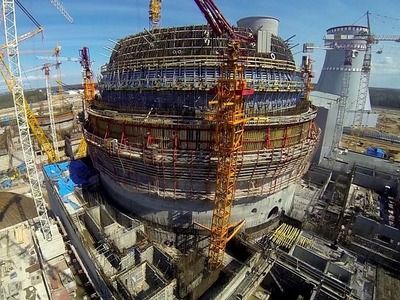 Fuel and energyAtomic industryInternational activitiesOther productionsAlternative energy
OREANDA-NEWS. Five companies expressed their desire to participate in the competitive procedure for the selection of a strategic investor for the Belene nuclear power plant (NPP) construction project. According to the print media on Monday, the Russian state corporation Rosatom, which sent its application to the Bulgarian Ministry of Energy on August 15, also the Korean Hydro and Atomic Energy Corporation, the Franco-German company Framatome, and the American company General Electric, are among the bidders. It's expected that the China National Atomic Corporation will also submit its application for participation in the project in the coming hours.

Monday, August 19 is the final day when companies wishing to participate in the Belene nuclear power plant construction project can submit their applications. On Sunday, Energy Minister Temenuzhka Petkova refused to answer questions from journalists regarding the Belene project, suggesting "be patient and wait for the official announcement" about the companies that submitted their preliminary applications.

The Minister repeatedly emphasized that Bulgaria invested 3 billion leva (about € 1.5 billion) in the construction of Belene, has two reactors and a site where the station should be built, and also intends to make every effort to implement this project.

Earlier, the first deputy head of Rosatom, Kirill Komarov, said that the Russian state corporation was ready to provide the Bulgarian government with any necessary support in the project to resume the construction of the Belene nuclear power plant in this country. The head of the state corporation, Alexei Likhachev, also previously reported that Rosatom was ready to consider the possibility of participating in the construction of a nuclear power plant in Bulgaria as part of international cooperation, but subject to conditions that guarantee the profitability of the project.
Source: OREANDA-NEWS
Другие новости: