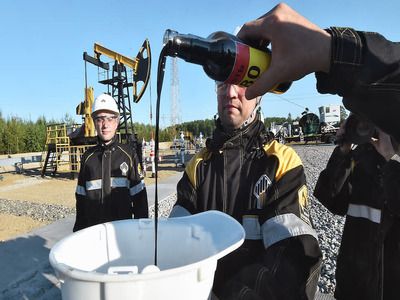 Russian Oil Fell to $ 19 per Barrel

Fuel and energyOilInternational activitiesWholesale of non-motor vehicles
OREANDA-NEWS. The price of consignments of Russian Urals oil for North-Western Europe fell on March 18 by $ 5.25 to $ 18.64 per barrel, the price agency Argus Media reported. According to him, this is the minimum level since February 2002.

The Urals discount for quotes from the North Sea dated Brent (an international reference mark reflecting the value of lots of North Sea light oil) reached $ 4.18 barrels. on the basis of CIF delivery to Rotterdam. “The cost of Urals is steadily decreasing amid Saudi Aramco’s decision to sharply reduce contract prices for April parties”, says Argus.

Saudi Arabia’s national oil company, after the collapse of the OPEC+ deal, began offering its Arab Light and Arab Medium oil at discounts of $ 5–10 / bbl. to the Russian Urals. Saudi Arabia specifically aimed at traditional buyers of Russian oil in Europe (large refineries) in an attempt to take away its market share from Russia, the American media noted.

The media reported on March 17 that traders are having difficulty selling Urals shipments with shipment in late March or early April. However, the Urals shipping plan for April 1–5 from Russian ports implies export growth of 25% over the same period in early March.