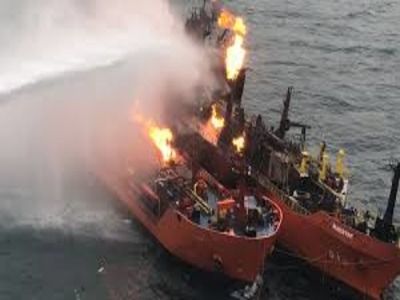 Fuel and energyWater transport and portsOilIncidents
OREANDA-NEWS. On board of Front Altair tanker, burning off the coast of Iran, there were 11 Russian sailors, now all of them were evacuated, reports RIA Novosti, citing the shipowning company Frontline.According to the agency, the crew of the tanker also included 11 Filipinos and one Georgian citizen. They were also evacuated. Earlier, the presence of Russian citizens on Front Altair was reported by the Norwegian newspaper Verdens Gang. The diplomatic services didn't confirm this.

“The Russian Foreign Ministry is checking information about citizens who might have been in the crew of a Norwegian tanker caught fire in the Gulf of Oman”, the press service of the ministry told the Russian media. The fire onboard Front Altair began after the explosion, a possible cause of which was called a torpedo attack or blasting on a mine. At the same time, another tanker, Kokuka Courageous, suffered. The company Frontline noted that the attack on the ship to speak is premature.

Earlier it was reported that 44 seamen were rescued from two oil tankers that were attacked in the Gulf of Oman, the Iranian news agency Irna reported, citing a source. According to him, the staff of the maritime search and rescue center in the province of Hormozgan delivered the sailors to the Iranian port of Jask. How many seafarers were on the ships, as well as their nationality, the Iranian agency doesn't specify.

The explosions on two tankers in the Gulf of Oman were reported by Iranian media. Reuters noted that as a result of incidents with ships, the crews evacuated and no one was hurt, but didn't specify what kind of incident it was. The American media noted that, according to the Fifth Fleet of the United States, the crew of one of the ships called the incident in the Gulf of Oman an attack.