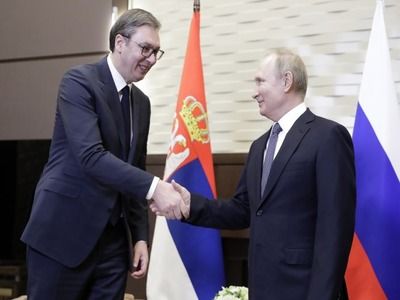 Fuel and energygasInternational activitiesTerritorial administration
OREANDA-NEWS. Serbia’s revenues from the transit of Russian gas through the Serbian section of the Turkish Stream gas pipeline will amount to $ 185 million annually. This was stated by Serbian President Aleksandar Vučić on Monday night on the Turkish television channel.

“For us, the gas pipeline is a strategic thing. In December, we built 403 km of the gas pipeline through the territory of Serbia, it remains to build four measuring stations and one large compressor station in Zhabari. The Turkish Stream is a thing that people will use for many years to come Serbia, becoming a transit country, will receive income in transit in the amount of $ 185 million annually", the Serbian leader said.

According to Vučić, Turkish Stream is of great importance for the industrialization of Serbia and attracting investors. According to him, through the gas pipeline, Serbia "will receive mainly Russian gas." “13 billion cubic meters of gas will come to Serbia, of which 3 billion cubic meters will remain in Serbia, the rest will go to Hungary, Bosnia and Herzegovina, Kosovo and Metohija”, Vučić said, expressing the hope that “the Bulgarians will complete the construction of their section of the pipeline until the end of May or until June, so that in September or until the end of 2020, gas will begin to flow to Serbia.

Earlier in December, the director general of Srbijagas Dushan Bayatovic announced that Serbia had completely completed the laying of pipes on its section of the Turkish Stream gas pipeline. The builders went from the border with Bulgaria to the border with Hungary as soon as possible, setting a record for construction speed.
Source: OREANDA-NEWS
Материалы по теме: