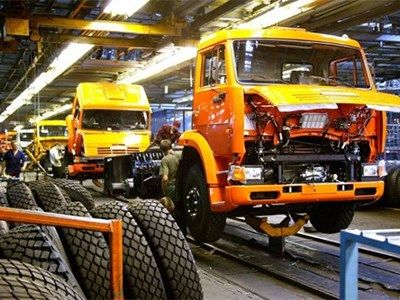 Trade and servicesVehicle commerce
OREANDA-NEWS. The Russian market of trucks with GVW over 14 tonnes in 2016 (data on registered vehicles) totaled 40 thousand units, which is by 11% more, compared with 2015. Thanks to state programs of demand stimulation, there wasn't a market decline in 2016.

The share of KAMAZ PTC on the Russian market of trucks with GVW over 14 tons (data on registered vehicles) amounted to 56% in 2016. For comparison, it didn't exceed 51% in December 2015.

According to the Program of Strategic Development of KAMAZ PTC until 2025, it is planned to produce 36 thousand vehicles and continue to modernize production in 2017.

According to General Director of KAMAZ Sergey Kogogin, production of a new lineup of six-cylinder in-line engines and a new plant for cab frame production are still priority areas of development. "In 2017, the company plans to spend nearly 20 billion rubles for development: we will continue to produce new-generation models - of a transport, heavy-duty family, the renovated long-haul tractor KAMAZ-5490; we'll work on the replacement of imported parts used in the manufacture of a new range of vehicles," said Kogogin.