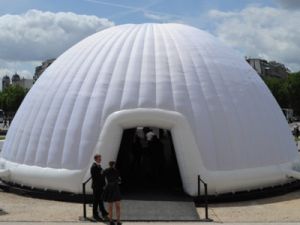 OREANDA-NEWS. The Roselectronic holding of Rostec State Corporation launched the production of pre-fabricated houses - pneumatic frame structures based on air-filled cylinders.  Such a system is designed for the operational construction of temporary premises: field hospitals, warehouses and mobile sports facilities, according to a company press release.

Installation of an inflatable building takes about two hours, its cost starts from one and a half million rubles, depending on the request.  Construction of the structure takes place with the help of an electrocompressor, which is forced by air under pressure into tubular shaped cylinders.

“Structures based on pneumo-structures, due to their characteristics, can be used in the aftermath of emergencies, the rapid creation of temporary housing, the development of the Arctic, and in many other areas. The new products fully meet modern high environmental standards,” said Oleg Evtushenko, Executive Director.