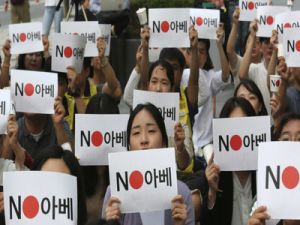 OREANDA-NEWS. The Republic of Korea is ready to cooperate on equal terms with Japan if Tokyo refuses the conflict and chooses dialogue and interaction. This was announced on Thursday by South Korean President Moon Jae In, delivering a speech on the occasion of the anniversary of the end of the Japanese occupation of the Korean Peninsula, which lasted from 1910 to 1945.

“Better late than never: if Japan chooses the path of dialogue and cooperation, we will gladly join hands with it. We will work together to make East Asia a region where cooperation and fair trade flourishes”, the leader of the republic emphasized. He urged Tokyo to stop using trade as a weapon. "If in the conditions of the international division of labor one country turns into a weapon a sector in which it has an advantage, freedom of trade suffers", the president said.

Moon Jae-in noted that neighboring countries should leave past grievances in the past and move together into the future. "We hope that Japan will play a leading role in establishing peace and prosperity in East Asia, reconciling with the past when it brought suffering to neighboring countries", he added. Observers note that this is the first time that the South Korean leader has directly proposed Japan to reconcile and abandon the growing trade conflict in recent months.

On August 2, the Japanese government decided to remove South Korea from the list of countries to which Japanese nanomaterials and high-tech components are supplied without restrictions on simplified schemes. The official decision will enter into force on August 28.

July 1, Tokyo tightened control over the export to South Korea of ​​the three types of materials necessary for the production of semiconductors and screens of various electronic devices. The reason for this, in particular, was the suspicion that some of these components could be illegally shipped from the Republic of Korea to the DPRK. Seoul categorically rejected such a possibility and in response imposed similar restrictions on Japan.