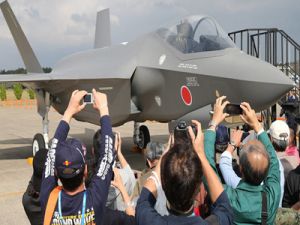 OREANDA-NEWS. Following negotiations with Japanese Prime Minister Shinzo Abe, US President Donald Trump said that Tokyo had agreed to buy 105 F-35 stealth fighters from Washington. The American leader said this during a joint press conference with the head of the Japanese government, CNN reports.Last year, Japan, the head of the United States added, was one of the largest buyers of US military equipment. In recent months, Trump said, shipments of “US-made defensive weapons to Japan” have accelerated.

In addition to this transaction, said the US president, Tokyo and Washington are counting on cooperation in space exploration. In particular, Japan, the American leader explained, will join the US mission to send American astronauts into space. "We will go to the moon, we will soon go to Mars," Trump assured, stressing that "from a military point of view, there is nothing more important than space now". Speaking of trade between the two countries, Trump noted that there is an “incredibly large imbalance”. He, the American politician believes, must be eliminated over time. Therefore, the parties, the president said, are now working on a trade agreement. “I think we will announce something, perhaps in August, and it will be very good for both countries,” Trump added.

The next time the American president and the prime minister of Japan will have to meet at the G20 summit, which will be held this summer in Japanese Osaka. The remaining details about the agreements reached with Tokyo Trump didn't disclose. On May 1, it became known that the F-35A models received their combat experience for the first time: the US Air Force used them to strike militant positions in Iraq. In total there are three modifications of this fighter: the ground-based F-35A, with a shortened take-off and vertical landing of the F-35B and a deck-mounted F-35 ° C.