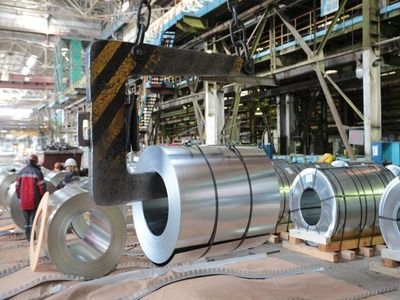 Ukraine Introduced the Antidumping Duty on Imports of Flat-Rolled Products from Russian Federation in Amount of 47.57%

Trade and servicesFinal metal products manufactureInterstate relationsWholesale of non-motor vehicles
OREANDA-NEWS. Ukraine has introduced a five-year anti-dumping duty on the import of flat-rolled products from the Russian Federation in the amount of 47.57%, as well as from China in the amount of 22.78%. This was reported on Thursday by the press service of the Ministry of Economic Development and Trade of Ukraine with reference to the decision of the Interdepartmental Commission on International Trade (ICIT).

"For manufacturers, exporters of goods from the Russian Federation, the rate of anti-dumping duty on imports to Ukraine was set at 47.57%, and for manufacturers, exporters from China, 22.78%", the report said. This decision was made in order to protect the Ukrainian manufacturer, it's specified in the message. ICIT also decided to extend for three years duties on the import of flexible porous plates, blocks and sheets of polyurethane foam (regardless of country of origin). At the same time, the special duty rate will be 11.22%, in 12 months - 10.66%, in 24 months - 10.13%.

In addition, the commission decided not to extend anti-dumping measures regarding imports of fibreboard to Ukraine from Belarus.

In May, ICIT approved a decision on the use of anti-dumping measures regarding the import of cement clinkers and Portland cement from the Russian Federation, Belarus and Moldova to the country's territory. In turn, the Ministry of Economic Development and Trade of Ukraine reported that Kiev introduced special duties on August 1 for all groups of goods from the Russian Federation, with the exception of "sensitive imports". The Cabinet of Ministers of Ukraine expects that in the second half of the year additional revenues to the state budget from special duties will amount to not less than 3.7 billion hryvnias ($ 141.2 million).

Previously, in response to such sanctions, Russia was forced to impose restrictions or a ban on the importation of a number of goods, as well as on the activities on its territory of certain legal entities and individuals from Ukraine.