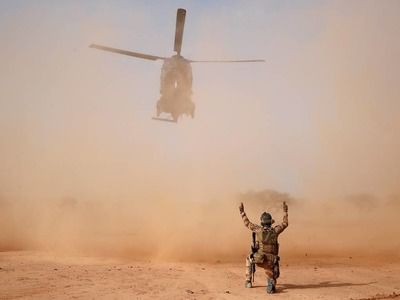 13 French Military Killed in Collision of Two Helicopters in Mali

IncidentsTransportAir transportAirports, air-traffic control
OREANDA-NEWS. Thirteen French military personnel were killed in a collision of two military helicopters in Mali. This is stated in a message on the administration of French President Emmanuel Macron, circulated on Tuesday. "The President with deep sorrow reports the death of 13 French soldiers on Monday evening as a result of a collision of two helicopters during an operation against extremists", the report said.

Macron expressed his condolences to the families of the victims, as well as his support for the French military participating in operations in the Sahel region.

In early November, French Minister of Armed Forces Florence Parley announced the start of Operation Bourgou 4 in the zone of convergence of the borders of Mali, Burkina Faso and Niger, aimed at combating the armed forces of the Islamists. The catastrophe occurred during an operation against extremists. She specified that the troops will operate as part of the French operation Barkhane, which has been ongoing since 2014.