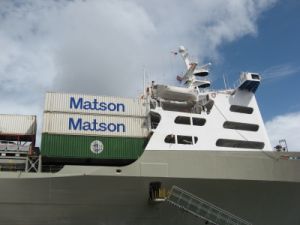 OREANDA-NEWS. Matson, Inc.  (NYSE: MATX), a leading U.S. carrier in the Pacific, has announced that it will introduce a new extension of its South Pacific Express (SPX) service to Tahiti, providing twice monthly arrivals from the U.S. mainland and Honolulu to French Polynesia.  Matson will begin accepting Tahiti shipments with the SPX departure of Samoana Voyage 007 from Honolulu on August 22, 2017 and first arrival at Papeete on September 4, 2017.

With the addition of Papeete, Tahiti as a port of call, Matson now provides export shipping from the United States and Hawaii to many of the major islands of Polynesia, including Samoa, American Samoa, the Cook Islands (Rarotonga and Aitutaki), Tonga (Nukualofa and Vava'u), Niue, New Zealand, and Fiji ( Suva and Lautoka).

In addition to unmatched arrival consistency and the shortest transit times from Hawaii, advantages of the new Tahiti service include Matson's dedicated terminal operations in Hawaii, Seattle, Oakland, and Long Beach, affording customers:

"This new service allows Matson to leverage existing operations in the region to offer market-leading service to a new destination," said Senior Vice President - Pacific Vic Angoco. "The people of Tahiti and Hawaii have enjoyed a long and rich history together with shared ethnic and cultural ties. We look forward to strengthening ties between our island communities."

Matson has appointed Papeete Seairland Transports as its exclusive agent in Tahiti. The company has a proud and accomplished history in the shipping industry of French Polynesia. General Manager, Thierry Charrier will lead a knowledgeable and professional team dedicated to delivering the world-class customer support in Tahiti for which Matson is known throughout the Pacific.