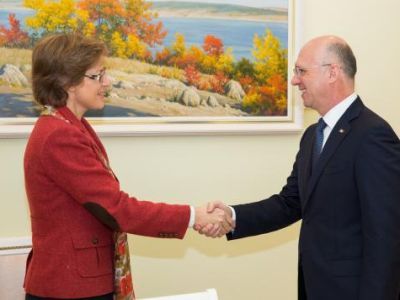 OREANDA-NEWS Prime Minister Pavel Filip today had a meeting with Ambassador of Germany to Moldova Julia Molnar. The officials analyzed developments in the implementation of the government’s reforms’ agenda and discussed prospects for boosting the Moldovan-German cooperation, including in terms of investments.

The prime minister referred to the cabinet’s priorities and made a radiography of the present state of things in Moldova. Pavel Filip stressed that the Association Agreement with the European Union was at the basis of all the government’s actions. “We do not think that we get close to EU only through statements and adoption of laws, but via domestic reforms. The government is focused on fundamental changes, even if more time is needed to see their effects,” Pavel Filip said.

In the context, the German ambassador highlighted the importance of a direct dialogue, at all levels, with the European states, in order to ensure the visibility of the implementation of the reforms’ agenda in Moldova. At the same time, Julia Molnar stressed that more efforts were necessary to change the citizens’ perception for the reforms and, in general, for the support provided by EU to Moldova.

At the same time, the PM noted that special emphasis was put on Moldova’s economic development, which would allow increasing social investments. ”We have made big efforts to change the business environment into a comfortable one for business. Big investors are attracted not only by the low level of taxes, but by the fact that their investment will be in an absolutely secured environment,” Pavel Filip said.

For her part, the German diplomat specified that “political stability is very important for an investor, besides the privileges offered by a certain country. The improvement of the justice sector and removing corruption are important not only for attracting investors, but also for the political prestige of Moldova.”

In the end of the meeting, Prime Minister Pavel Filip thanked for the constant support provided by Germany to Moldovan and Julia Molnar gave assurances that the bilateral support and the one within the European Union would continue.