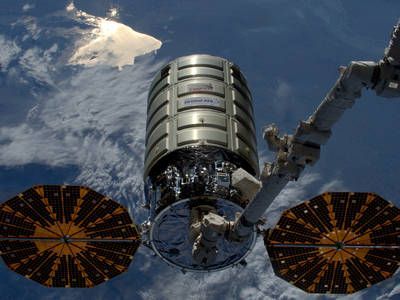 OREANDA-NEWS. The latest Cygnus spacecraft to deliver cargo to the International Space Station (ISS) has been successfully launched by an Antares rocket from Wallops Island, Virginia at NASA’s Wallops Flight Facility, on its eighth operational mission. The Cygnus spacecraft comprises two main sections: the Service Module from Orbital ATK, and the enhanced Pressurized Cargo Module (PCM), developed and built by Thales Alenia Space, a joint venture between Thales (67%) and Leonardo (33%).

This Cygnus was named in honor of astronaut Eugene “Gene” Cernan, the last human to set foot on the Moon.

After arriving at the International Space Station, Cygnus will be captured by the robotic arm and docked to the Nadir port of Node 1. It will be unloaded and used for the first time as an extension of the orbiting laboratory for an experiment featuring the SpaceTango facility, with the TangoLab for microgravity research and development. This test is designed to demonstrate the station’s expanded ability to host experiments, by using the Cygnus PCM.

Thales Alenia Space has supplied cargo modules to Orbital ATK since the start of the Cygnus program. The first contract in 2009 provided for the delivery of nine modules, while a second contract in 2016 added nine more. Eight operational PCMs plus a demo module have been launched to date, four in the original version and five in the enhanced version. The PCM used for this flight is the last one produced under the first contract. Built by Thales Alenia Space’s Turin plant using a new friction welding system, the new modules feature lighter weight and a more efficient design that increases payload weight and volume, while also accommodating irregularly shaped containers.

This launch further confirms Thales Alenia Space’s ongoing contribution to the success of Cygnus cargo missions, and its ability to contribute to future space exploration missions.

About Orbital ATK
Orbital ATK is a global leader in aerospace and defense technologies.  The company designs, builds and delivers space, defense and aviation systems for customers around the world, both as a prime contractor and merchant supplier.  Its main products include launch vehicles and related propulsion systems; missile products, subsystems and defense electronics; precision weapons, armament systems and ammunition; satellites and associated space components and services; and advanced aerospace structures. Headquartered in Dulles, Virginia, Orbital ATK employs approximately 13,000 people across the U.S. and in several international locations.