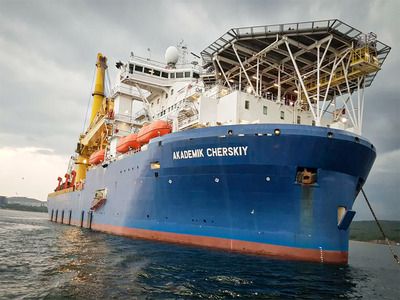 BuildinggasTransportWater transport and ports
OREANDA-NEWS. The Akademik Chersky vessel, owned by Gazprom's subsidiary (Gazprom Fleet) and the only vessel at the disposal of Russia capable of completing the construction of the Nord Stream 2 gas pipeline, is heading towards Mozambique. This follows from the Vesselfinder ship tracking service data.

The pipelayer is located at the northern tip of the island of Madagascar and moves southwest, towards the Comoros and the coast of Mozambique. Moreover, in the column "destination" in the card of the vessel, Suez in Egypt is still listed. There, "Academician Chersky" should arrive by March 25.

"Academician Chersky" has been in the port of Nakhodka since October 2019. But in December 2019, the United States imposed sanctions against the builders of Nord Stream 2, due to which the Swiss pipe-laying company Allseas stopped participating in the project. Due to the lack of vessels capable of continuing pipe laying work at great depths, the construction of the gas pipeline was delayed. In early February, the "Academician Chersky" left Nakhodka and headed south.

To complete the construction, it remains to lay less than 160 km of pipes with a total length of Nord Stream-2 of 1234 km (2468 km on two lines).
Source: OREANDA-NEWS
Другие новости: