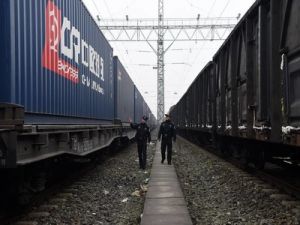 OREANDA-NEWS. Four people died and another 2 were missing as a result of a freight train leaving the rails in the Chinese province of Henan, reports China Central Television.

The incident occurred on Wednesday at about 22.00 local time (17.00 MSK) in the city of Gongyi, Zhengzhou District, when the freight train of the aluminum corporation Aluminum Corporation of China (Chalco) for some unknown reason derailed, turned over and crashed into a village apartment building. According to the channel, at present, rescuers have found the bodies of four people without signs of life. Search and rescue work continues.

Earlier it was reported that two local residents were missing, as well as four people who were on the train at the time of the collision. However, later the assumption of the death of passengers was confirmed, but two other people are still missing.

Local authorities have already formed an operational headquarters, which is engaged in carrying out search and rescue operations and liquidation of the consequences of an emergency. The causes of the incident are being investigated, the portal Sina reports.