Russian Foreign Intelligence Service Called Bulgaria the “Epicenter” of the US Campaign against Moscow
State, 21.02.2020, 15:51 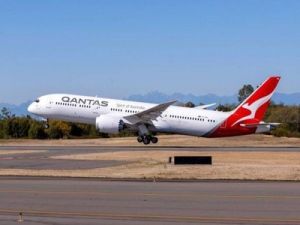 OREANDA-NEWS. The Australian airline Qantas on its website reported that its Boeing 787 Dreamliner completed a flight from London Heathrow Airport to Sydney in 19 hours and 19 minutes.

The liner covered 17.8 thousand km and flew over the territory of 11 countries, including Germany, Russia, China and Indonesia. The report notes that the flight time compared to a flight with one change has decreased by approximately two hours. Onboard there were 40 people, including crew members. Thus, the airline broke its own record for the duration of a non-stop flight from New York to Sydney, which took 19 hours and 16 minutes.

“We met sunrise twice”, quoted The Guardian as citing company CEO Alan Joyce. The publication clarifies that the Boeing 787 Dreamliner can accommodate 300 passengers, but with such a load it would be impossible to complete a flight without refueling.

The flight from New York to Sydney, as well as the current flight from London to Sydney, are part of the Sunrise project to launch regular nonstop flights from Australia's east coast to London and New York. It's also timed to coincide with the anniversary of the company - in September 2020, Qantas will turn 100 years old.