Riah Oil Tanker Disappeared in the Strait of Hormuz 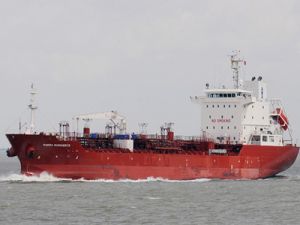 OREANDA-NEWS. In the Strait of Hormuz, the Riah oil tanker from the United Arab Emirates flying the flag of Panama stopped giving signals. It is reported by the news agency with reference to the tracking data and information of the company Refinitiv, which provides information for the financial markets.

The Riah tanker made regular flights from Dubai and the port of Sharaj to the port of Fujairah, passing through the Strait of Hormuz. However, on Saturday evening, the vessel's tracker signals disappeared. As noted in the information service company Refinitiv, this has never happened before with a tanker. “This is a red flag”, said a company specialist. Attempts to get a shipowner's comment failed. The registered owner of the vessel, Prime Tankers LLC, said it sold it to Mouj Al-Bahar. However, this company stated that they don't have such a vessel.

The fate of the tanker Riah attracted attention amid the aggravation of the situation in the Strait of Hormuz because of the sanctions against Iran and the response of the Iranian authorities. At the beginning of July in Gibraltar, the authorities, with the support of the British marines, detained the Iranian supertanker Grace 1, which was carrying oil to Syria. In response, Tehran threatened to seize a British tanker. The actions of the British forces, the Iranian authorities called illegal and accused of piracy.

On July 11, the United States and Great Britain reported that five armed boats flying the Iranian flag tried to stop a British tanker in the Strait of Hormuz. They were stopped by the frigate of the royal fleet HMS Montrose, who aimed the guns at the Iranian ships and on the radio demanded that they retreat. In Tehran, denied involvement in the incident. The United States also accuses Iran of attacking two tankers in the Gulf of Oman, which occurred in June.