European Commissioner: Collapse of Economy of One of EU Countries Will Lead to Collapse of the Europe
World, 06.04.2020, 11:36

Russian Embassy in Vienna Has Noted an Increase in Cases of False Fabrications in EU about Coronavirus in Russia
State, 06.04.2020, 10:22 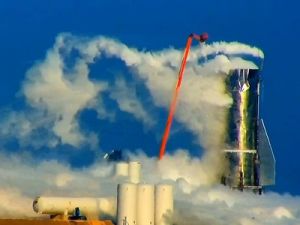 OREANDA-NEWS. The first full-scale prototype of the SpaceX Starship Mk1 exploded during tests at a launch complex in the Boca Chica area (Texas, USA). This was announced on Wednesday by the portal Spaceflight. The incident occurred during a test of the operation of the ship with a maximum filling of the tanks for methane and oxygen with cryogenic liquid.

"This result wasn't a surprise, since the goal of the current test was to maximize the pressure in the ship’s systems", a SpaceX statement said. It's noted that the company won't repair Starship Mk1 and will immediately begin to create a more advanced version of Mk3.

The Mk1 prototype was introduced on September 29 in Texas. A ship 50 meters long and nine meters in diameter was made of alloy steel. Its carrying capacity is 150 tons. During the presentation, the head of SpaceX, Ilon Musk, said that the first orbital flight of the ship is planned to be completed within six months. In August, successful testing of the Starhopper prototype took place, during which the engineering solutions necessary for the construction of Starship were tested.