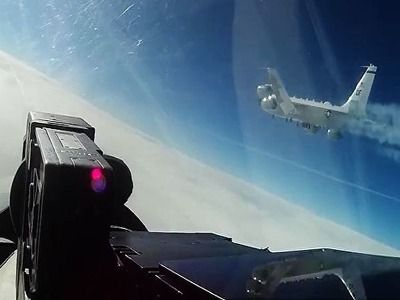 TransportAir transportMilitary securityInternational activities
OREANDA-NEWS. A Russian Su-27 fighter was raised to intercept two US and Swedish airplanes near the Russian border, the Department of Information and Mass Communications of the Ministry of Defense reported.The incident occurred on Monday over the Baltic Sea. "The crew of the Russian fighter approached a safe distance to the air objects and identified them as reconnaissance aircraft of the US Air Force RC-135 and the Swedish Air Force Gulf Stream", the report said.

The pilot accompanied them, preventing a violation of the airspace of Russia in compliance with all security measures. It is noted that the flight of the Russian aircraft was held strictly in accordance with international rules for the use of airspace. Su-27 got close to foreign reconnaissance aircraft, the pilot reported on their identification. Further the fighter accompanied aircrafts, - writes the Russian mass media with reference to the Ministry of Defense of Russia. The ministry noted that the flight of the Su-27 took place in strict accordance with all the necessary rules and regulations.

Recently, the activity of foreign reconnaissance aircraft and UAVs near the borders of Russia and Russian military facilities abroad has increased significantly. They are regularly noticed in the region of the Crimea and the Krasnodar Territory, above the Baltic Sea and Russian bases in Syria.

In 2018, units of the radio engineering troops of the Aerospace Forces discovered and escorted more than 980 thousand aircraft. About three thousand of them are foreign combat aircraft, of which over a thousand are reconnaissance aircraft. Recall that NATO naval exercises Baltops-2019 are taking place in the Baltic Sea. Up to 40 ships, ships and submarines from 18 countries take part in them.