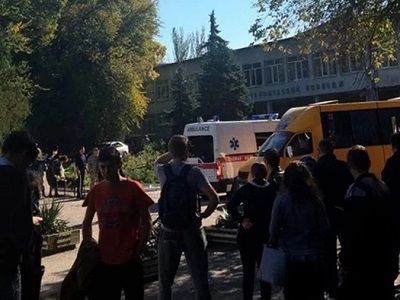 WorldIncidentsStateMilitary security
OREANDA-NEWS  The explosion occurred in Kerch Polytechnic College. The explosive device filled with metal objects was installed in the dining room. The investigation classified the incident as a terrorist attack.  18 dead.

The unidentified explosive device which worked in a dining room of Polytechnic College in Kerch, was filled with metal subjects. This was reported by the official representative of the Investigative Committee Svetlana Petrenko, noted on the website of the Department.

The report also States that a criminal case on the fact of the incident was initiated under article 205 of the criminal code (terrorist act). On specialists, specialists, after completion of their work, the investigators will proceed to the examination of the epicenter of the explosion.

Also formed a headquarters, which included employees of the UK, FSB and the interior Ministry.

According to preliminary data, the organizer of the attack is a 22-year-old resident of Kerch, who committed suicide after the explosion. He worked alone.

The explosion at the Polytechnic College of Kerch occurred around 12: 00 GMT on Wednesday, October 17. As a result, ten people were killed, about 50 injured. The national anti-terrorism Committee reported that an explosive device had been detonated in the school. Press Secretary of the President of Russia Dmitry Peskov said that Vladimir Putin reported on the incident. The head of state expressed his condolences to the relatives of the victims.

Two special boards with medical modules are preparing to fly from Moscow to evacuate the victims of the explosion in the College in Kerch. The press service of the Ministry of health.