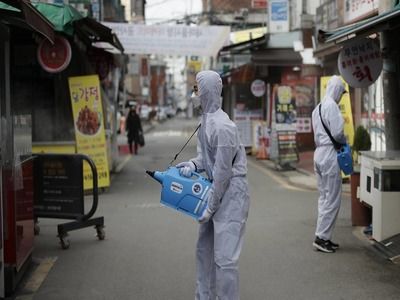 WorldPublic healthInternational activitiesIncidents
OREANDA-NEWS. The number of cases of new type of coronavirus infection in the Republic of Korea increased by 334, reaching 1,595. The number of deaths was 12, the Center for Disease Control and Prevention at the Ministry of Health said on Thursday.

Most of the new infections are in Daegu City (307), and six cases have been reported in Seoul. In the past few days, there has been a sharp increase in the number of people infected in the Republic of Korea. In this regard, the government on February 23 decided to postpone the start of the school year in schools for a week, it will begin on March 9.

The outbreak caused by the new coronavirus disease was recorded at the end of December 2019 in the most populous city of Central China - the 12 millionth Wuhan. The World Health Organization recognized it as an emergency of international proportions, describing it as an epidemic with many foci. Outside the PRC, infections were detected in 40 countries, including Russia.

The Chinese authorities recorded 2715 deaths in the country, more than 29.7 thousand people recovered, the number of people infected during the entire spread of the virus exceeded 78 thousand.
Source: OREANDA-NEWS
Материалы по теме: