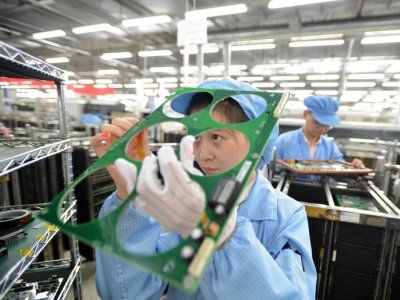 To date, most empirical evidence on climate change impacts has focused on the agricultural sector.

In a new paper published in the Journal of Environmental Economics and Management, researchers use detailed production data from a half-million Chinese manufacturing plants in the period 1998-2007. They predict that by the middle of the 21st century, if no additional adaptations occur, climate change will reduce Chinese manufacturing output annually by 12 percent—equivalent to a loss of nearly $40 billion in 2007 dollars.

“Previous work has largely focused on how climate change may affect economic activity by lowering the productivity of workers,” says coauthor Kyle Meng, an assistant professor of environmental economics in the University of California, Santa Barbara’s Bren School of Environmental Science & Management and its economics department. “It is well documented that when it’s hot, people work less productively.”

The new paper, written with Olivier Deschenes, a professor of economics UC Santa Barbara, Peng Zhang of the Hong Kong Polytechnic University, and Junjie Zhang of Duke Kunshan University in China, points to the effects of temperature on the productivity of capital as well. That is, increasing temperatures not only make workers less productive, they also make machines operate less well.

According to Meng, the results suggest that if we are to reduce climate losses on manufacturing output, adaptation measures should not focus solely on reducing the sensitivity of workers to extreme heat, but also that of factory machines.

“More broadly, our paper introduces a new cost of climate change that hasn’t been documented before,” he says. “China is already doing a lot to reduce its emissions. These existing policies were put into place even without this new evidence on manufacturing sector losses.

“Given the importance of manufacturing for China, we hope our findings will help lead to more stringent Chinese climate policy.”