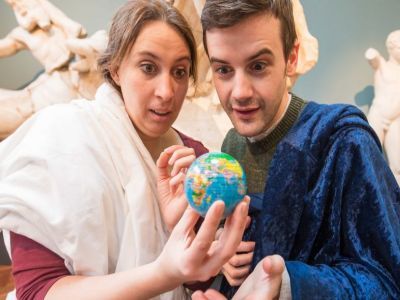 OREANDA-NEWS While the Potter books have been published in at least 70 linguists and dialects, it is surely the first time one of the books has been translated line-by-line into many different languages.

“Harry Potter and the ‘Rosetta Stone” is just one of the highlights of LinguaMania, which is a collaboration between Creative Multilingualism, a research programme led by Professor Katrin Kohl in Oxford’s Faculty of Medieval and Modern Languages, and the Ashmolean Museum.

Some 2,500 people will visit the Ashmolean tonight to explore languages ranging from Latin, Sanskrit and Old Norse to Portuguese, Chinese and Arabic. The event will bring people together for an evening of multilingual performances, experiments, talks, and fun with languages.

LinguaMania marks the launch of Creative Multilingualism, a four-year research programme designed to reach a deeper understanding of how linguistic diversity and the interplay between languages contribute to human creativity.

Professor Kohl said: ‘Our language taps into our most private thoughts and deepest feelings, it unites us with the people we live with, and it connects us to our ancestors and future generations. LinguaMania will bring people together to experience linguistic creativity in action, in the Ashmolean’s stunning museum space dedicated to Crossing Cultures, Crossing Time.'

The event will showcase the linguistic riches that lie hidden in the Ashmolean and visitors will have the opportunity to decode hieroglyphs or join a tour by linguistics expert John Coleman as he explains inscriptions in cuneiform and Etruscan, and gives an insight into the mystery of Linear A.

In the Cast Gallery, a collaboration between David Maskell from the Faculty of Modern Languages and comedy group The Dead Secrets will take the audience on a romp through parts of Ovid’s Metamorphoses and involve them in mixing Latin and English.

The centrepiece of the event will be a performance entitled Mappa Mundi Mother Tongue by young people from Pegasus Theatre. Presided over by the colossal Apollo from the Temple of Zeus in Olympia, they will create a giant map of the world in the Atrium of the museum. Afropean choir Mizike and the Sudanese Nile Band will help them to bring the map to life with stories and song from around the world.

A workshop with celebrated poet Kate Clanchy and Forward Foundation poetry scholar Shukria Rezaei will give participants the opportunity to discover the 13th century Persian poet Rumi and write their own creative responses to his work.

This forms part of a collaboration between Oxford Spires Academy, a state secondary school in Oxford, and the research programme, in which the partners will jointly explore how the many different languages pupils speak at home enriches their creative writing.

Prizewinning author Ulrike Draesner, currently Writer in Residence at the Faculty of Medieval and Modern Languages, will join up with German poetry expert and translator Karen Leeder for a creative mashup mingling German and English, and Dennis Duncan from the Faculty of English will conduct a workshop in Extreme Translation which will challenge participants to take linguistics risks.

Data scientist Scott Hale from the Oxford Internet Institute will explore how bilingualism interacts with the internet, and visitors will have an opportunity to record their voices to put themselves on a Language Landscape map that is being constructed by postdoctoral fellow Charlotte Hemmings from the Oxford Faculty of Linguistics and her colleague Hannah Gibson from the School of Oriental and African Studies in London.