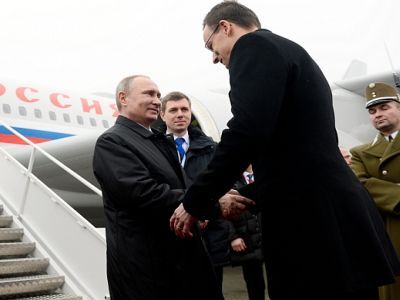 OREANDA-NEWS “It is clearly in the interests of the Hungarian economy and the Hungarian people for Hungary to maintain relations with Russia that are based on mutual respect and founded on common sense”, Minister of Foreign Affairs and Trade Péter Szijjártó said on Hungarian M1 television on Thursday.
Speaking in an interview at Liszt Ferenc International Airport prior to the arrival of Russian President Vladimir Putin, Mr. Szijjártó said: “This is the first time in the past four-five years that the world of international politics is favourable and supportive from the perspective of Hungarian-Russian relations”. “In recent years there has been major pressure on Hungary from America and Western Europe to stop maintaining pragmatic cooperation with Russia”, he added. According to the Foreign Minister, the changes in global politics are now, however, proving that it was right to maintain relations based on mutual respect and founded on common sense with Russian, because it is now “increasingly clear” that the world’s leading powers and politicians are also interested in forging relations with Russia.

“It would have been more comfortable for Hungarian foreign policy to get in line ‘with the chorus of people continuously criticising Russia’, but Hungarian diplomacy is directed from Budapest and is only prepared to make decisions that serve the interests of the Hungarian people”, he noted.

On the subject of President Putin’s visit, the Hungarian Foreign Minister told reporters: “The most important topic of discussion will be energy, and from now on we can begin negotiating Hungarian-Russian gas purchasing for the period following 2021”. “In addition, the Paks nuclear power plant project, Hungarian-Russian heavy industry cooperation, the situation of Dunaferr, as well as various cultural and space technology issues, will also be on the agenda”, he added.

With regard to the sanctions against Russia, Mr. Szijjártó stressed: “Hungarian enterprises incurred damages of 6.7 billion dollars in lost export opportunities between 2013 and 2016; this money is missing from the revenues of Hungarian companies and has endangered Hungarian jobs, and accordingly it is in the interests of Hungarian enterprises and the Hungarian economy for export opportunities to Russia to reopen”. “It is in our interests for Russia to be successful, and this requires the sanctions, which have been a failure from both a political and economic perspective, to be lifted at the earliest opportunity”, the Hungarian Foreign Minister added.