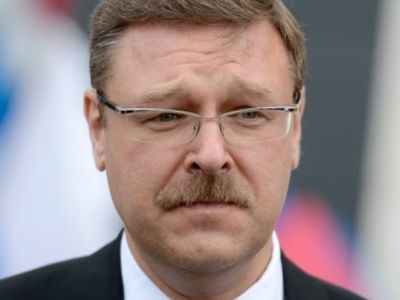 OREANDA-NEWS   The prospects for Russia-China relations in the future will be optimistic, said Konstantin Kosachev, chairman of the Russian Federation Council's Foreign Affairs Committee, in a recent interview.

Kosachev made the remarks ahead of Russian Prime Minister Dmitry Medvedev's official visit to China from Oct. 31 to Nov. 2 at the invitation of Chinese Premier Li Keqiang to jointly hold the 22nd China-Russia Prime Ministers' Regular Meeting, a mechanism between the two countries' heads of government starting from 1996.

Kosachev said Russia and China seek to jointly build a "fair and multi-polar" world, echoing Chinese President Xi Jinping's remarks that China-Russia relations are at their best time in history.

Kosachev also stressed that Russia-China relations are built on common interests of both countries and they view the relations with each other as a priority in making foreign policy.

The senior lawmaker recalled Xi's words that China-Russia relations should be a diplomatic priority for both countries despite the changing international climate.

"I am sure that the objective mutual interests of the most populous country and the largest country in the world, together with the solid foundation laid by bilateral agreements and joint projects, make Russia-China ties very resistant to external influences," Kosachev said.

The relationship between Russian and Chinese leaders also contributes to bilateral relations, he said, calling it a "unique subjective factor" that should not be underestimated.

During a visit to Russia on July 4, Xi was awarded by President Vladimir Putin the highest order of Russia, known as the Order of St. Andrew the Apostle the First-Called.

"This was the highest evaluation of President Xi's personal merits in achieving an unprecedented level of relations between our countries," Kosachev noted.

In his view, China is doing everything in its power consistently and quite predictably to ensure the establishment of a multi-polar and non-conflict world based on the respect of different ethnic groups, cultures and countries.

"Russia and China share similar approaches to many international issues. Therefore, our countries increasingly form a tandem in the settlement of key global and regional problems," he said.