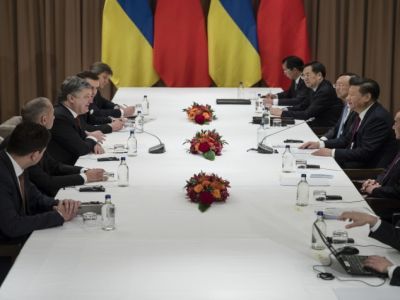 The President of Ukraine congratulated the Chinese leader on the 25th anniversary of diplomatic relations between Ukraine and China. The Head of State noted that the two countries demonstrated sincere interest in the enhancement of traditional friendship and expansion of fruitful cooperation.

“We are interested in the expansion of political and economic cooperation between Ukraine and China,” President Poroshenko said.

It was emphasized that the Ukraine-China relations have a strategic nature and are based on the principles of mutual respect to sovereignty and territorial integrity of the two countries.

Xi Jinping noted that China supports territorial integrity and sovereignty of Ukraine and the choice of the Ukrainian nation.

The Head of State expressed hope that China would promote peaceful settlement of the situation in Donbas and termination of the Russian aggression against Ukraine, as well as restoration of Ukraine’s territorial integrity, including Crimea.

The parties agreed to continue interaction for the sake of maintenance of peace in at the regional and global levels, inter alia, in the framework of the UN Security Council.