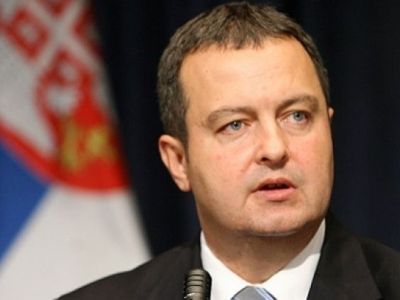 WorldEventsStateInterstate relations
OREANDA-NEWS Following the coordinated statements by US Ambassadors in Belgrade, Pristina and Tirana, First Deputy Prime Minister and Minister of Foreign Affairs of the Republic of Serbia Ivica Dacic said that the statements of Rama, Thaci and Musliu on the unification of all Albanians and the creation of a Greater Albania were not "careless" or "not very careful" as the Ambassadors had said, but they were dangerous. Dangerous for peace and stability of the Balkans and Europe.

"Would the Ambassadors have made so lukewarm statements had Skopje, Greece's Epirus region or Montenegro's Ulcinj been mentioned, as Musliu put the Serbian city of Nis within the borders of a Greater Albania? They would have certainly reacted more sharply – as if the attack on Serbia were something that could be tolerated.

As long as such statements are not clearly seen as a threat to peace in the region, Albanians will continue with provocations, like Musliu did today with the story that it was time for unification, which is the task for the prosecutorial office to deal with, as nowhere in the world is it allowed to call for the violation of territorial integrity of a country. This should not be the case in Serbia either, and the fact that Serbia is restrained in its reactions and wants to play a constructive role in the region does not mean that Serbia is weak. On the contrary, it is a reflection of our strength and commitment to peace.

One thing is for certain, these statements are not careless, and they are a clear reflection of the platform of a Greater Albania shared by all Albanians. Yesterday it was Kosovo, today it's Nis, and tomorrow it will be Skopje, and so on and so forth.

Please do not be careless, Your Excellencies, and fail to see this on time, until it is too late", says the statement by Serbian Foreign Minister Ivica Dacic.