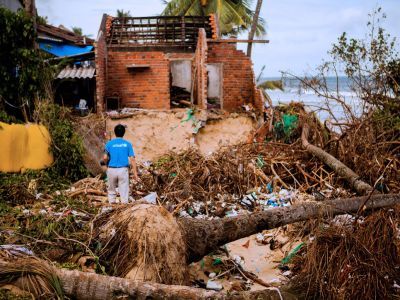 OREANDA-NEWS More than a week after Typhoon Damrey battered south-central Viet Nam, assessments by United Nations aid agencies have revealed that vulnerable populations – including children, and pregnant and nursing mothers – in poor and remote areas are still underserved by relief efforts.

Typhoon Damrey, or 'Storm No.12,' made landfall early Saturday morning, 4 November, hitting communities with pre-existing malnutrition concerns and lack of information on preparedness and protection from the disaster and its aftermath.

“During a rapid assessment mission, [our] staff met with several vulnerable children […] who suffered much more from the ongoing consequences of the typhoon,” the UN Children's Fund (UNICEF) said Monday.

An estimated 150,000 children under the age of five are at risk of malnutrition and over 80,000 pregnant and nursing women in need special care.

One such case is that of 11-month-old Ngan, who lives in a small fishing community in Phu Yen (about 1,200 kilometres from the capital, Hanoi), whose father is a casual worker on a fishing boat and the family is struggling to make ends meet, even during normal times.

In the chaos during the first two days after the storm, Ngan's parents were unable to find meat or fish on the local market and though there is food available now, the family cannot afford to buy sufficient quantities, resulting in reduced portions.

Ngan's mother is also not getting enough nutrition and has difficulty producing enough milk to breastfeed her child.

According to UNICEF, in addition to malnutrition, children are also exposed to an increased risk of waterborne diseases as drinking water supply was interrupted for several days after the storm and people had to resort to unclean water for their consumption.

“[We are] stepping up efforts to support national relief efforts to help the most affected families and children,” said the UN agency in the release.

“Specific interventions look at addressing the increased risk of malnutrition through micronutrients and calories supplements for children and breastfeeding mothers and by training health workers on how to detect and treat malnutrition,” it added, noting also the importance of raising public awareness in the affected regions.

As of this weekend, 123 people have died or are missing as a result of the storm. Overall, 4.33 million people are estimated to have been affected and among them 395,000 are in need of assistance.

Other UN agencies, including the International Organization for Migration (IOM), the World Health Organization (WHO) and the UN Development Programme (UNDP) have also been assisting in the response.