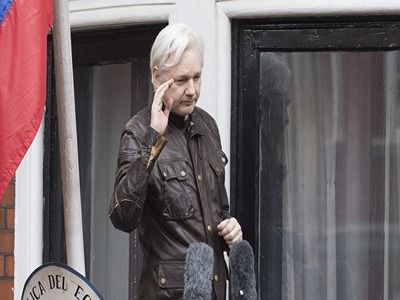 WorldEventsJustice
OREANDA-NEWS. Ecuadorian authorities have deprived Wikileaks founder Julian Assange of the right to asylum in the embassy of this Latin American country. According to Reuters, the British police detained him right in the building of the diplomatic mission.

"Julian Assange, 47, was arrested today by the Metropolitan Police officers at the Ecuadorian embassy," law enforcement officials said. The diplomatic mission of Ecuador in London denied the founder of WikiLeaks, Julian Assange, the granting of asylum, WikiLeaks reported on Twitter.

Earlier, WikiLeaks reported on the possibility of expelling a journalist from the Ecuadorian embassy and extradition to the United States. A pretext for interrupting cooperation may be Assange’s breach of the requirements of financial regulators in the Panama dossier case. British security forces, together with their American colleagues, allegedly discussed the details of the detention of a journalist, but after their plans became widely known to the public, law enforcement officers refused them.

Julian Assange gained worldwide fame after the publication of materials on US military operations in Iraq and Afghanistan, which killed civilians. In 2006, Assange founded the site WikiLeaks, on which secret materials were later published concerning spy scandals, corruption in the upper echelons of power, war crimes and secrets of diplomacy of major states. In 2010, the journalist was accused of sexual harassment.

He has been hiding since 2012 on the territory of the diplomatic mission of a South American country. Asylum was presented to him by the previous president of Ecuador, Rafael Correa, after Lenin Moreno became head of state, with respect to Assange was revised.

His mother commented on the arrest: He can be brought to justice within 24 hours. he faces a maximum of 12 months in prison, with reference to lawyers.