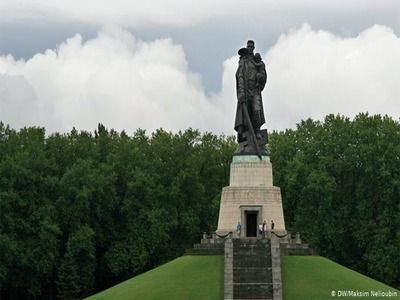 WorldMuseums and monuments protectionEventsInternational activities
OREANDA-NEWS. Berlin residents and guests of the capital are carrying flowers to the Monument of the Grieving Mother in Treptow Park, a Russian news correspondent reports from the scene. Almost all the foot of the pedestal, on which the three-meter kneeling figure of a woman is installed, is already strewn with flowers.

The monument was erected at the entrance to the central alley of the memorial complex in Treptow Park, it was reported earlier that a few days ago a monument was attacked, vandals doused the sculpture with oil. The memorial complex in Treptow Park was solemnly opened by the Soviet commandant of Berlin, Alexander Kotikov, on May 8, 1949. The monument is one of the most famous pedestals in the world for victims of the war against fascism. The authors of the complex in Treptow Park are sculptor Yevgeny Vuchetich, architect Yakov Belopolsky, engineer Sara Varelius and artist Alexander Gorpenko. The construction of the memorial was carried out for a very long time, about 2 years, more than 7 thousand workers and builders were involved, the most diverse specialists applied their efforts. The remains of the dead soldiers were buried in this place, they were transferred from other parts of the city. In total, the complex has over 7 thousand mass graves.

At the entrance to the arch inscriptions in Russian and German: "Eternal glory to the heroes who fell in the battles for the freedom and independence of the socialist Motherland." The path from the entrance goes to a large sculpture, one of the most important in the park, it is about 3 meters high “Grieving mother”. And already from the sculpture opens a beautiful view on the rest of the memorial and a 12-meter monument. The granite from which the memorial was created was taken from the ruins of the Reich Chancellery. A central sculpture depicting a Soviet soldier with a little girl in his arms was installed on the territory of the complex in the park in memory of those killed in the Great Patriotic War.