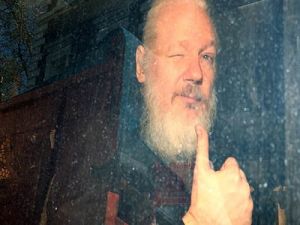 OREANDA-NEWS. The founder of the organization WikiLeaks Julian Assange won't be extradited to any country in which the death penalty operates. This was stated by Deputy Foreign Minister of Great Britain Alan Duncan at a press conference following a meeting in Quito with Ecuador’s Foreign Minister José Valencia.  "The founder of WikiLeaks won't be transferred to any country where the death penalty is used. An agreement was reached on this between Great Britain and Ecuador", the news agency quoted Duncan on Monday.

In 2006, Assange founded WikiLeaks, where secret information about the activities of a number of governments, including the United States, is published. Fearing extradition to the United States from Sweden, where two women accused him of sexual harassment and rape, he asked for asylum in 2012 at the Ecuadorian embassy in London and has been there continuously for almost seven years. In April, Ecuador refused to grant him further asylum, after which Assange was arrested by police for failing to appear in a London court on a warrant of 2012, as well as on the basis of an extradition request sent by Washington to the British authorities in 2018.

A London court on May 1 sentenced Assange to 50 weeks in prison for violating the conditions of release on bail. There is also consideration of a request for his extradition to the United States, where, according to the charges filed by the American Justice Ministry, the founder of WikiLeaks faces up to 175 years in prison for hacking activities.

In 2006 he founded the site WikiLeaks, in order to publish classified information obtained from anonymous sources. In 2010, in order to guarantee the confidentiality of informants and editors of WikiLeaks, Assange decided to move the site server to Sweden, as the legislation of this country provides reliable protection for the anonymity of users. He also planned to receive a residence permit.