Chinese Ambassador to Russia Announced Availability of a Vaccine against Coronavirus
State, 24.02.2020, 11:48

China is Ready to Abandon Trade Negotiations With the US 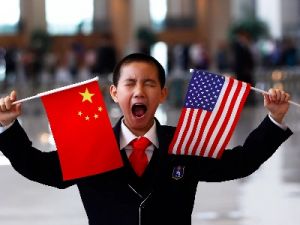 OREANDA-NEWS Trump administration has scheduled a new round of trade talks with the Chinese delegation in Washington on September 27-28.

Beijing is considering the idea of refusing to participate in a new round of trade negotiations with the United States due to the threat of Washington to introduce duties on additional groups of goods from China at the beginning of the coming week. This was reported on Sunday by the Wall Street Journal.

The newspaper referred to information received from former and current Chinese officials. They consider it inappropriate to resume negotiations in the face of pressure from the administration of US President Donald Trump. "China is not going to negotiate with a gun pointed to its head," - quotes the publication of one of its sources.

On Saturday, the Wall Street Journal reported that the Trump administration has scheduled a new round of trade talks with the Chinese delegation in Washington on September 27-28. The American delegation will be headed by Finance Minister Steven Mnuchin. At the same time, the United States on September 17 or 18 will announce the introduction of duties in the amount of about 10%, not 25%, as originally planned, for additional groups of goods from China worth $200 billion, the newspaper claimed.

Trump has repeatedly stated that he does not like the deficit in trade with China. On June 15, he announced that in connection with China's alleged theft of American intellectual property and technology, as well as the fact that Beijing is resorting to unfair trade practices, the United States will impose duties of 25% on imported goods from this country worth $50 billion.the Chinese Authorities immediately responded with tariffs for imported American products at a similar cost.

After that, the US representative at the trade negotiations Robert Lightheiser announced the preparation of an additional list of Chinese goods worth $200 billion for the introduction of tariffs in the amount of 10%. He motivated this step by the fact that China does not want to change unfair trade practices.