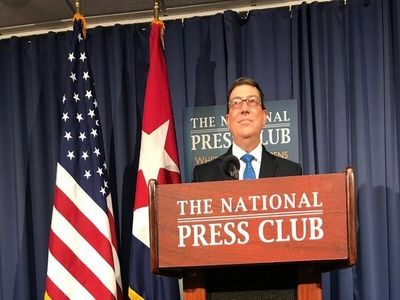 WorldTerritorial administrationMilitary securityInterstate relations
OREANDA-NEWS. The lifting of the US trade and economic embargo against Cuba could be a real support for Washington’s citizens of the island, the desire for which was announced earlier by US President Donald Trump. The corresponding opinion was expressed on Tuesday by the Minister of Foreign Affairs of the Caribbean, Bruno Rodriguez Parrilla.

"If President Trump wants to support the Cuban people, he will have to lift the genocide blockade, renew previously forbidden flights between the US and Cuba and issue visas to Cubans. He must also restore the freedom of US citizens to travel to Cuba", the diplomat wrote on Twitter. US President Donald Trump said Tuesday that his country supports the quest for "restoration of democracy" in Venezuela, Nicaragua and Cuba. According to him, Washington is "regaining its leadership in the world" and "is again fighting for freedom in its hemisphere".

The United States severed diplomatic ties with Cuba in 1961 in response to the nationalization of American property on the island. After that, Washington announced the introduction of a trade and economic embargo on this country. In December 2014, US President Barack Obama at that time admitted that Washington’s previous policy towards Havana was not working, and announced the beginning of a move towards normalizing bilateral ties and easing sanctions against Cuba.
Source: OREANDA-NEWS
Подписывайтесь на наши группы: Instagram | VK | Facebook | Twitter
Материалы по теме: