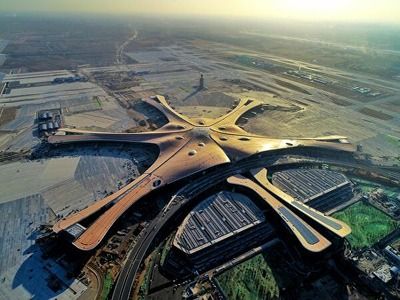 Earlier it was reported that the commissioning of the air harbor is scheduled for September 30. However, as noted in the report, on September 25, Daxin will already receive the first flights. The transport connection between the center of the Chinese capital and the airport - a segment of the Beijing subway line, as well as six city bus routes (five day and one night) - will be launched on September 26.

The total investment in the airport construction amounted to about 80 billion yuan (about $ 11.7 billion), which makes this project the most expensive in the history of Chinese civil aviation. Daxing is located 46 km south of central Beijing. The commissioning of the air harbor, which in the future should become the largest in the world, will optimize the flow of passengers. The report also said that the new airport will become the largest transportation hub for all of Northern China.

According to the plan, at the time of opening, the capacity of the air harbor will be about 45 million passengers per year, which will help significantly reduce the load on air traffic in the Chinese capital during the Beijing Winter Olympics in 2022. In 2025, the new transport hub will receive 72 million, and in 2040, 100 million people.

Recall, the construction of “Dashin” began on March 15, 2016. The world-famous architect of Iraqi-British origin Zaha Hadid, who is known as a prominent representative of deconstructivism, was involved in the development of the design. The design of the airport clearly emphasizes its corporate identity, in which there is no place for strict lines and sharp corners.
Source: OREANDA-NEWS
Подписывайтесь на наши группы: Instagram | VK | Facebook | Twitter
Rate this article:
Print