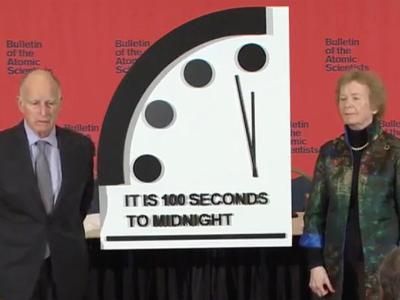 OREANDA-NEWS. According to the Bulletin of the Atomic Scientists, the so called Doomsday Clock, which shows the time before a conventional nuclear disaster (midnight), was moved forward in 2020 at 23:58:20.

“It is 100 seconds to midnight. We are now expressing how close the world is to catastrophe in seconds – not hours, or even minutes. It is the closest to Doomsday we have ever been in the history of the Doomsday Clock. We now face a true emergency – an absolutely unacceptable state of world affairs that has eliminated any margin for error or further delay,” Rachel Bronson, the President of the Bulletin of the Atomic Scientists, said.

Doomsday Clock is a project launched in 1947. The farthest from midnight position (17 minutes) was in 1991, when the USSR and the USA signed an agreement on the reduction of strategic weapons. It showed 23:58 three times in the entire history. For example, the hands were in such position in 1953, when the USA and the USSR tested hydrogen bombs.
Source: OREANDA-NEWS
Материалы по теме: