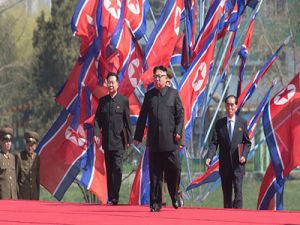 OREANDA-NEWS. The DPRK leadership supports the policy of Russian President Vladimir Putin aimed at protecting the national interests and sovereignty of the country. This was announced on Wednesday by the chairman of the Presidium of the DPRK Supreme People’s Assembly Choi Ryong He at a meeting with a delegation of Russian media leaders who is in Pyongyang on a working visit.

“We fully support and share Putin’s policy to protect the sovereignty of Russia”, said Choi Ryo Hae. “As well as efforts to strengthen the country's economic and social power”. At the same time, the Chairman of the Presidium of the ANS expressed confidence that Russia will successfully cope with all external challenges that are aimed at hindering the country's development.

According to Choi Ryong He, Putin enjoys great authority in the DPRK. He also noted that in the near future, the delegation of the DPRK Navy will visit Russia. A delegation of Russian media leaders arrived in Pyongyang on Monday for talks on cooperation with colleagues from the DPRK.