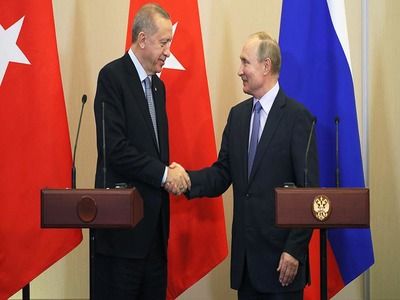 Erdogan Announced Plans to Meet with Putin on March 5

WorldInternational activitiesEventsState management
OREANDA-NEWS. Turkish President Recep Tayyip Erdogan plans to meet with Russian President Vladimir Putin to discuss the situation in Syria no later than March 5. This was announced by Erdogan himself, betrays the Anadolu agency.

“We agreed to meet with Russian President Vladimir Putin on March 5”, Erdogan said. According to him, the meeting can be held either in Istanbul or in Ankara, the leaders will continue to discuss the road map for Syrian Idlib.

In addition, Erdogan said that on February 26 the Russian delegation will come to Turkey to discuss the situation in the de-escalation zone. The Turkish leader also noted that so far there are no agreements on holding a summit with the participation of Russia, Turkey, Germany and France.
Source: OREANDA-NEWS
Материалы по теме: