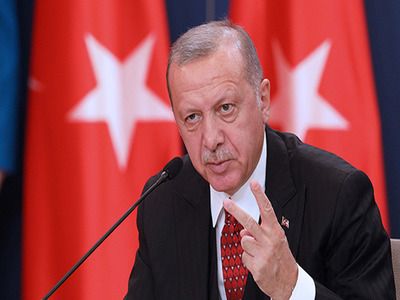 WorldDiplomatic organizationsInternational activitiesMilitary security
OREANDA-NEWS. Turkish President Tayyip Erdogan believes that the United Arab Emirates (UAE) provides financial support to mercenaries who allegedly help the commander of the Libyan National Army (LNA) Field Marshal Khalifa Haftar in Libya. He expressed this opinion in an interview with Turkish journalists on board his plane on the way from Algeria to Gambia. Excerpts from the interview are quoted on Tuesday by the Turkish television channel.

"During the visit of German Chancellor Angela Merkel to Turkey, we discussed this topic with her in detail. We told them that Haftar is a liar, and you provide an opportunity to indulge this liar. Egypt is the main supporter of Haftar, like the Abu Dhabi administration", claimed Erdogan.
According to him, the UAE is not only providing financial support, but also "supplying weapons and ammunition."

On January 19, the international Berlin conference on Libya was held. The meeting participants attempted to achieve a lasting truce between the parties to the civil war, which has been going on since 2014. Leaders of Russia, Germany, France, Turkey, a number of countries in the Middle East and Africa.
Source: OREANDA-NEWS
Подписывайтесь на наши группы: Instagram | VK | Facebook | Twitter
Материалы по теме: