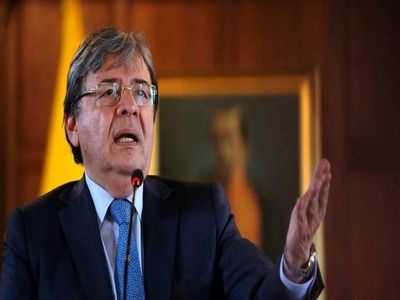 WorldInterstate relationsEventsDiplomatic organizations
OREANDA-NEWS. Russian Foreign Minister Sergei Lavrov on Monday will hold talks with his Colombian counterpart Olmes Trujillo. The visit of the Foreign Minister of Colombia to Russia will last a week. During this time Trujillo will head his country's delegation at the VII meeting of the Intergovernmental Russian-Colombian Commission on Trade, Economic, Scientific and Technical Cooperation, and will also visit St. Petersburg to participate in the St. Petersburg International Economic Forum June 8.

According to the Russian Foreign Ministry, during the talks, the heads of the foreign affairs agencies will discuss the full range of Russian-Colombian relations. Among the expected topics of the upcoming meeting are the development of trade, economic and investment ties, the implementation of joint initiatives in the field of information technology, the political situation in Colombia, and, of course, recent events around Venezuela.

After the aggravation of the political situation in Venezuela in January of this year, the resolution of the crisis in this country remains to this day one of the most pressing issues on the international agenda. To resolve it, Moscow constantly maintains contacts with all Latin American countries, including Colombia, which, as noted in the Russian diplomatic service, is an important partner of the Russian Federation in the region.

Both in Moscow and in Bogota, they have repeatedly spoken in favor of a political solution to the crises arising in the world and against interference in the internal affairs of countries. The parties adhere to this position in the question of Venezuela, but they see the settlement process in different ways. For example, Colombia was one of the first countries that, together with the United States, recognized opposition leader Juan Guaydo as interim head of Venezuela.
Source: OREANDA-NEWS
Поделиться в соцсетях:
Подписаться на наши группы: Instagram | VK | Facebook | Twitter
Rate this article: