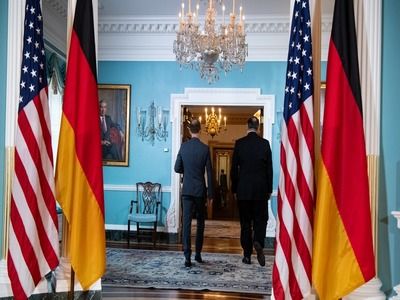 WorldInterstate relationsPrint mediaTV
OREANDA-NEWS. The unexpected cancellation of the visit of US Secretary of State Mike Pompeo to Germany was evidence that the friendship between the two countries was "shattered." This conclusion in his article in the German newspaper "Suddeutsche Zeitung" came journalist Daniel Bressler. Earlier on Tuesday, Pompeo unexpectedly canceled a visit to Germany several hours before the meeting with German Chancellor Angela Merkel and Foreign Minister Heiko Maas, and visited Baghdad instead.

“In the world of diplomacy there is impoliteness,” writes Bressler. However, at the same time there is also “shamelessness,” the journalist believes, citing Pompeo’s decision as an example. “One way or another, more than two years after Donald Trump took office, much of what was recently presented as German-American friendship has been smashed to pieces,” the journalist states, noting that It could be more important to the US Secretary of State than a short visit to Berlin.

At the same time, Bressler believes that Washington’s foreign policy under Trump is predictable in its own way. In his opinion, it follows the principle that one’s own interests should be pursued not by means of “smart” diplomacy, but “by means of a rough, imperious policy,” even in disputes with allies. "In many cases, the United States is not at all allies, but enemies, against whom alliances need to be formed," the author is sure. At the same time, the journalist expresses the hope that after Trump’s departure, the United States will again become a true partner and associate for Germany.

"But never again will they become the guarantor state on which the Germans relied for so long," concludes Bressler. Earlier, German Foreign Minister Heiko Maas said about the structural changes in relations between Europe and the United States, which adversely affect bilateral contacts. In addition, he criticized Washington’s foreign trade policy, noting that the trade war between China and the United States threatens Germany, and the Americans ’desire to influence the EU energy market through sanctions against Russia is unacceptable.
Source: OREANDA-NEWS
Поделиться в соцсетях:
Подписаться на наши группы: Instagram | VK | Facebook | Twitter
Rate this article: