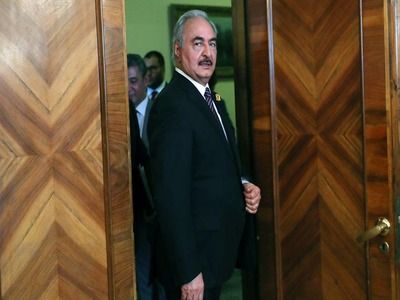 Haftar Explained Why He Didn't Sign a Ceasefire in Libya

WorldTerritorial administrationInterstate relationsMilitary security
OREANDA-NEWS. The commander of the Libyan National Army (LNA), Khalifa Haftar, who left Moscow without signing a ceasefire with the Government of National Accord (PNS) in Tripoli Faiz Sarraj, said that the proposed version of the document ignored a number of LNA requirements.

"The draft agreement ignores many of the requirements of the Libyan army", Al Arabiya television quoted him as saying on Tuesday. As previously reported by the Syrian TV channel, Haftar at indirect meetings in Moscow insisted on the deployment of his forces in Tripoli and the formation of a government of national unity, which would receive a vote of confidence in the parliament sitting in Tobruk.

The Field Marshal also called for international monitoring of the ceasefire without any involvement from Turkey and demanded the unconditional withdrawal of "mercenaries brought from Syria and Turkey".