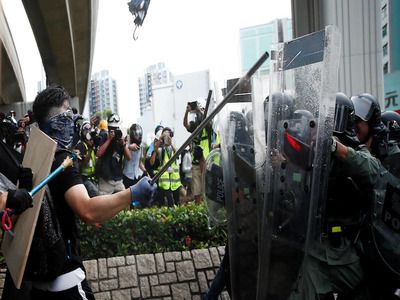 WorldPublic order and securitySocial associationsJustice
OREANDA-NEWS. Hong Kong law enforcement officials arrested 266 rioters over the past week. This was announced at a press conference on Monday by senior police superintendent John Jie. "Since last Monday, police detained a total of 266 people, including 212 men and 54 women aged 11 to 74. They are accused of illegal gatherings, possession of weapons and acts of vandalism", he said.

Commenting on today's events, John Jie noted that radical protesters erected barricades in the morning and blocked roads at 120 points throughout Hong Kong. "They made dangerous tricks: threw foreign objects onto the subway rails, set fires, threw Molotov cocktails in the subway cars", the officer said. He called the incident shocking, during which the radicals poured flammable liquid and set fire to a passerby who criticized their actions. The victim was hospitalized in critical condition.

John Jie said that law enforcement agencies are investigating because of two cases of police officers possibly exceeding their authority. In one of these cases, an officer on a motorcycle intentionally tried to run into runaway demonstrators on Monday; he was temporarily suspended from duty.