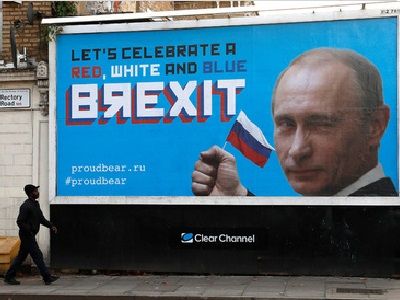 Humorous Billboards with Putin Appeared on the Streets of London

OREANDA-NEWS In London, a group of Proud Bear activists posted billboards with a photo of Russian President Vladimir Putin to celebrate Russia's "contribution" to the UK's exit from the European Union.

The announcement of the start of the holiday campaign is posted on the Twitter account of the group.

Activists bought three of the Billboard. On the two posters in addition to pictures of Putin's slogans is "Let's celebrate the red-white-blue BЯEXIT" and " BЯEXIT means BЯEXIT". "R "in the word Brexit replaced by Russian "Я". The third Billboard depicts the former head of the British foreign Ministry Boris Johnson with Russian flags and the inscription "Thank you, BOЯIS".

The website of Proud Bear says that the group consists of Russian military intelligence officers who "for years help the people of England to get rid of the European Union and democratic elections." "The group hopes to counter the recent unfounded negative publicity against GRU agents by placing advertisements that emphasize their role in the liberation of Britain from the European Union," said Proud Bear in a statement.​ The group is raising funds to rent one of the largest digital screens in Central London at Waterloo station to put their posters there.

Reuters was able to contact members of the group who sent a statement in Russian and explained that "the group is concerned about the state of Russian democracy and opposes Moscow's authoritarian tendencies." Representatives refused to say who exactly is behind this action. After the publication of Proud Bear named Reuters media, which publishes fake news, and stressed that only read Sputnik and Russia Today.

The decision to withdraw the UK from the European Union was adopted by referendum on 23 June 2016. Refusal of membership in the EU was supported by more than half of the voters.

In March, the British authorities accused Russia of involvement in the poisoning of former intelligence Colonel Sergei Skripal and his daughter Julia. Was later named the names of the alleged poisoners — they were some Alexander Petrov, and Ruslan Bashirov. Moscow denies all charges.