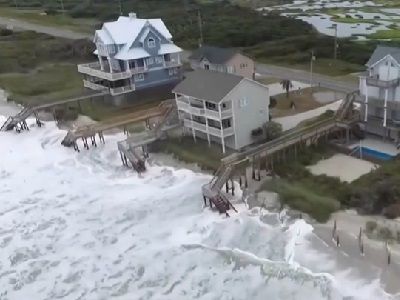 OREANDA-NEWS Hurricane "Florence" came to the East coast of the United States. Several States have declared a state of emergency. Airports are closed until Saturday.

It's so American to laugh in the face of danger. In the East of the United States hit a strong hurricane "Florence". About him warned, but still in the appointed weather forecasters day and hour dozens of people rushed to the shore of the raging ocean.

America waited the hurricane. Still would-such show! Wind at 150 kilometers per hour. Four-meter waves. Flood. Residents of coastal cities are urged to leave their homes. One and a half million people were warned about the evacuation.

«Not to relax. Don't relax. Stay alert. It's a powerful storm that can kill. Today, the threat is becoming a reality," said North Carolina Governor Roy Cooper.

But look at the disaster from the first series were even residents of homes on the ocean – with the hope that a pair of nailed plywood would save them from the hurricane.

"We're not leaving house, my family has lived here for many years. I think we have a chance to survive, " said May Dinkins.

All of America wants to see Florence. In pursuit of high ratings on the shore rush fearless reporters. Poeple shoot photos and videos from all possible points. Even from space.

And the show continues. Forecasters say, will be pouring for a long time. This means that floods will increase and landslides will be added to them.

"Worst is yet to come. We see so far only the harbingers of the storm. This test will be a serious test for us, we must show endurance and patience, work smoothly and maintain common sense," said Roy Cooper.

Now in a potentially dangerous zone there are five million Americans. 30 thousand of them were left in a hurricane without light tonight.

On the night of Friday, September 14, "Florence" weakened to the first category.  At the same time, due to the strong wind, part of the roof of one of the hotels in Jacksonville collapsed, as a result of which about 70 guests were evacuated

One person was killed, more than ten were injured. Dozens of houses have been destroyed. This is the result of gas explosions in Massachusetts.

Earlier, the governors of the States of North and South Carolina, as well as Virginia and Maryland imposed a state of emergency because of the hurricane. Also, the state of emergency was introduced in Washington. US President Donald Trump said that "Florence" will be one of the strongest hurricanes in recent decades.

In the Czech Republic, Five Citizens Were Detained on Suspicion of Participation in Hostilities in UkraineOreanda.ru | 21.04.2021 17:41:23