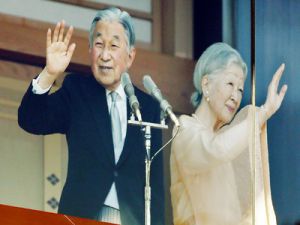 OREANDA-NEWS. In Japan, the ceremony of the abdication of the emperor Akihito from the throne. Currently, the monarch has completed the appropriate religious and family rituals. Emperor Akihito in a high ancient cap and unique brown robes, visited three sanctuaries on the territory of the palace complex, NHK Television and Radio Company reports. They are dedicated to the sun goddess Amateras, other Japanese emperors and Shinto gods.

The royal throne of the first of May will be occupied by the crown prince Naruhito, who is now 59 years old. There will be a new era in the country called Rave, which will replace the Heisei period. Akihito leaves due to his old age and health, which do not allow him to cope with a large amount of ceremonial and other functions. The monarch announced his decision to retire in August 2016. After a serious discussion at the expert level, the national parliament was forced to pass a special law allowing Akihito to abdicate the throne during his lifetime. The last time in Japan, the monarch underwent a similar procedure in 1817.

The ceremony of renunciation will continue at 17 o'clock in the palace hall "Matsu-no-ma", which will bring the imperial regalia: a sacred mirror, a sword and jade ornament of magatama. The emperor will address the nation, after which the monarch and his wife, Michiko, will be relieved of all public duties. Recall that Akihito took the throne on January 7, 1989. He served as monarch for over 30 years. During this period, the emperor actively traveled around the country, including visiting the regions that suffered from the elements. He visited each of 47 Japanese prefectures at least twice.

Akihito has always called on the people for peace. In December last year, he admitted that he was satisfied that during his stay on the throne, Japan had not participated in any war.