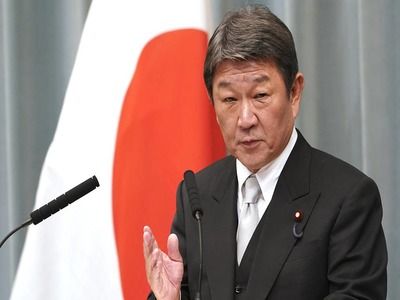 WorldInterstate relationsInternational activitiesTerritorial administration
OREANDA-NEWS. New Japanese Foreign Minister Toshimitsu Motegi intends to approach the negotiations with Russia on a peace treaty from a position of mutual benefit. He said this in a Friday interview with a business Japanese newspaper.

"The peace treaty with Russia is a problem in the solution of which we haven't made a single step over the past 70 years", the minister said. "I would like to expand our horizons a bit and approach the issue from a position of not one-sided, but mutual benefit". “During the first meeting with Russian Foreign Minister Sergei Lavrov, I felt that we were on the same wavelength”. Motegi said. He confirmed that he intends to visit Moscow this year, exchanging views, in particular, on ways to carry out joint economic activities in the southern part of the Kuril Islands.

“I would like to hope”, the minister said, “that this will lead to a revitalization of contacts and the strengthening of mutual trust”. Motegi also assured that he intends to use the experience he gained when he was the minister responsible for economic affairs as head of the Foreign Ministry. Toshimitsu Motegi was appointed Foreign Minister as a result of rearrangements in the Japanese government on September 11. Previously, he served as Minister for Economic Recovery, oversaw trade negotiations with the United States.

Talk about the allegedly upcoming transfer of the Kuril Islands has not ceased in the press and the expert community for several months. The reason for this was that Russian President Vladimir Putin and Japanese Prime Minister Shinzo Abe agreed to intensify Russian-Japanese negotiations on a peace treaty on the basis of the Joint Declaration of October 19, 1956. This is a document on the cessation of the state of war between the two states and the restoration of diplomatic and consular relations.